How to make peinirli recipe

The following dish is something that i was craving for a lot of time. Making a peinirli is not easy but it is something special.

I remember when i was young my father used to bring ready dough from a local baker and we did the filling by ourselves. It was one of the highlights of our weekend at that time as it is a really filling dish.

Again looking some of the history of the dish i have to say that it is something that it it used in Middle East a lot, obviously with some variations. One of the characteristics of this food is the way that the dough is being made and shaped to have a shape of a small boat or canoe as i like to say.

The filling can be anything you like to be honest. Usually ham and cheese will do but the classic is minced meat with egg!

HOW TO COOK PEINIRLI

The difficult thing is to make the dough i guess. As it was my first time it was kind of difficult i have to say. But i was surprised on how well it ended up. So… You need to put all the ingredients in a bowl and start kneading them with your hands. The secret -as i have learned – is to add the water slowly while you do it until the dough slowly starts to remove from your hand rather than keep sticking to it.

Rather difficult i know but it is something i guess you learn after some time of training.

When you see that it starts to become “heavy” in your hands and a unit rather than dissolving, its time to leave it to “grow”. So cover the bowl with a towel and let it for around 15-30 minutes. If everything goes well then you will notice after some minutes that the dough has grown almost twice its size. Magic huh?

Now depending on how many peinirli you want to make then its time to divide the dough into bowls and start shaping them. Ideally you need to put them in a board and spread them, first make the sides and then make sure that you “pinch” them in the top sides so they cannot open.

Again put them into the oven as it is close and let them there for 15 minutes so the dough grows again. When it is done, get them out and spread some butter all over them and then put them back in the oven in medium heat no more than 15-20 minutes. Just enough so they can be baked and maybe become a bit of brown on the edges.

As you are doing that or after you need to prepare the fillings. So in a big pot add the minced meat together with the onions and a bit of olive oil.let it sizzle and then add some water. Not to much to cover it but just enough so it can easily boil until the water evaporates. Make sure that the meat is left without water afterwards, just with the oil.

When its ready then you need to add it in the middle of each peinirli. In order that the egg remains in the middle of the peinirli we create a small hole with our hands where we place the egg.

Put them back in the oven for 15 more minutes and they are ready.

If you feel like it you can even put some cheese on top! Enjoy! 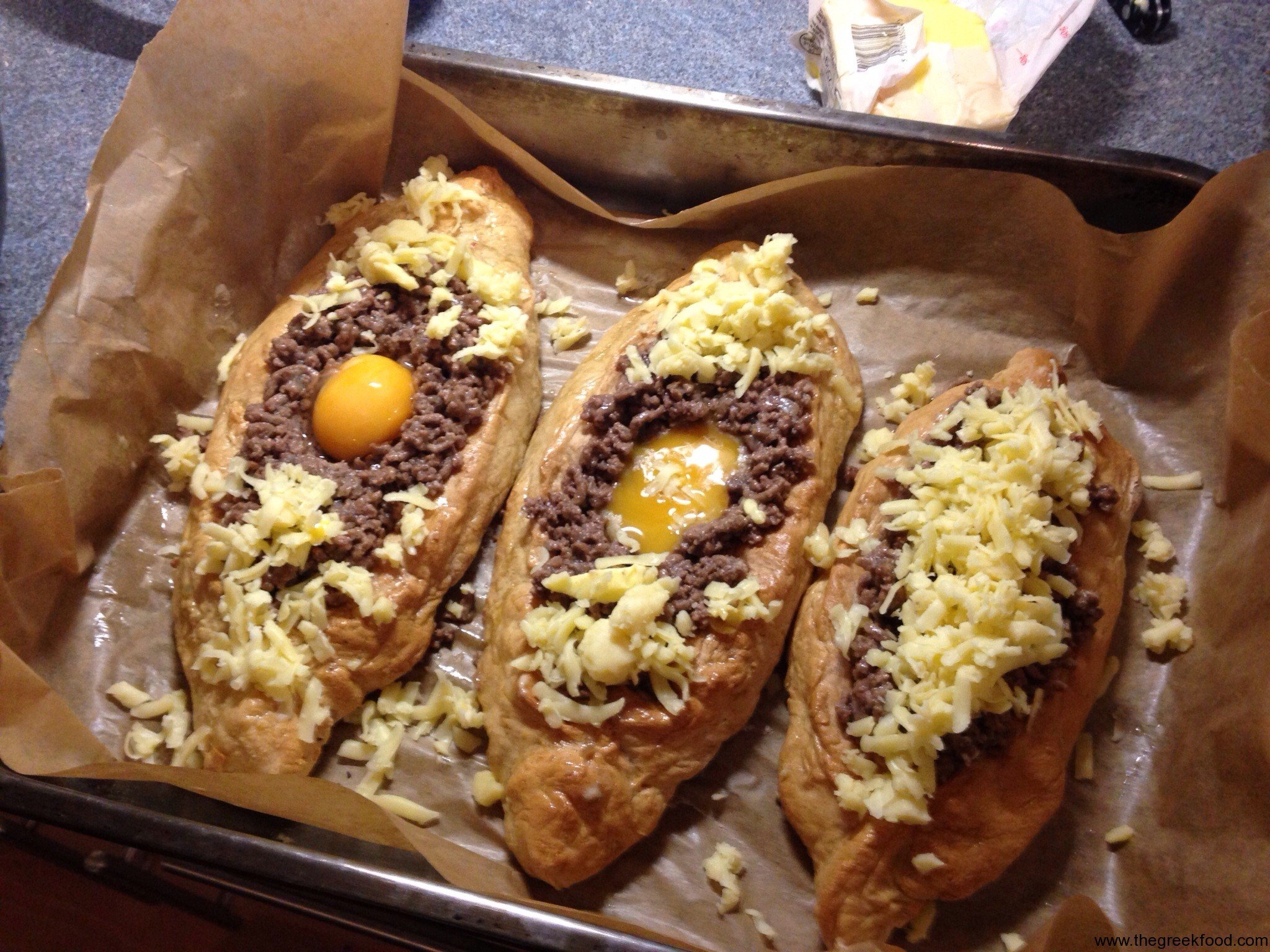