To be fair I don’t remember anymore how my father used to cook this anymore  but I guess it’s the memories that count.

My father was a captain for many years and he did spent long time in the sea. He was captain for big oil ships that used to travel a lot around Indonesia, Persian gulf and the states.

Whenever he was back in Greece, he used to spent a long time with us, trying to help us study but also cooking for us his own favorite dishes and things of course he knew we would like. No matter what he cooked though, it was necessary to put a story behind it…. A story always makes the dish a little bit better.

So one of the favorite dishes he was cooking for us especially when he had to do something quick for his two boys was the corned beef chilli, “cowboy style”.  Now I didn’t know what corned beef was back in the day and when I did found out I cant say I was impressed.

Really high in cholesterol and saturated fat you wouldn’t really call it…healthy. Nevertheless, combined with a variety of ingredients and not consumed every day -obviously – can be a good alternative in your diet.

The point though was that my father was always telling us that this kind of food was what the cowboys were eating on the wild west when they had to stay at night out in the fields watching there cows. That was what it was exciting for me back then!

Also, very rarely can a kid say no to beef…

Now, as far as I remember my father always used to add potatoes, tomato, eggs and a lot of chilli to mix everything up. Chilli and beans must have been the favorites of the cowboys  back in the time.

In addition, I do know that this blog is called thegreekfood.com and this shouldn’t really be considered Greek. Nevertheless, it is my memories of food in Greece..

Use a deep pan with a lid and pour a bit of olive oil in medium heat. Throw the onions and stir until they become golden

Add your corned beef (or minced) and wait until it gets brownish from all sides.  Throw some water but not too much so it doesn’t cover the beef. Add the small potatoes and the chilies as well as the celery sticks.

Now its time to throw the salt and pepper until you bring it to your liking. Close the lid and let it boil for 15-20 minutes more or less…until you see the  potatoes to become a bit more soft.

Add the tomato soup and the red beans and continue to boil until the mixture is thick and juicy.  Add some water if necessary but be careful not to over do it.

After 45 minutes tops, it should be ready to serve.

Pro tip: Serve it with a nice fried egg. 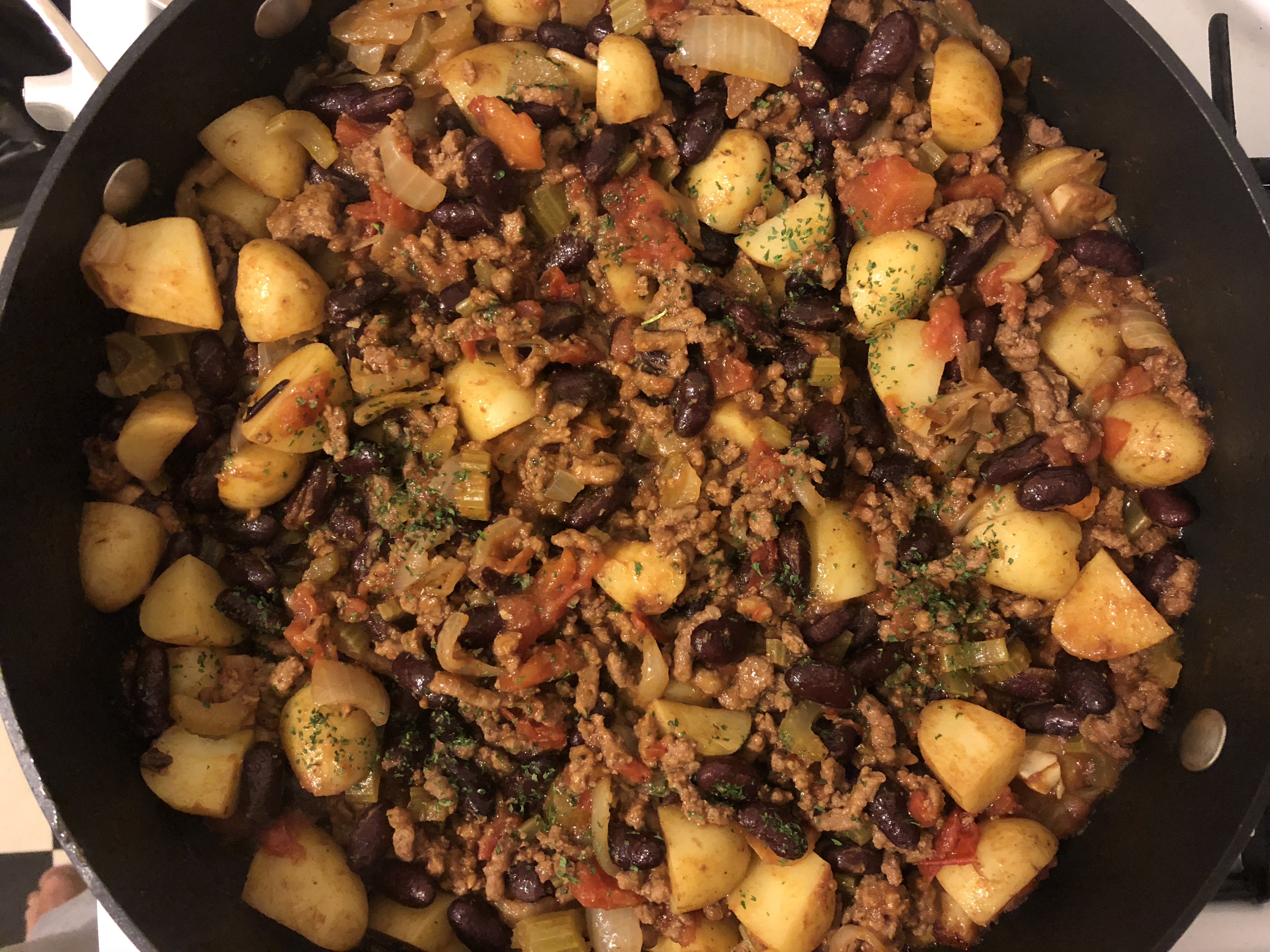