Spanakorizo is not a dish that you hear really often about in the Greek cuisine. It is though considered one of the classic ones to have especially during the summer months. Spinach is used in couple of recipes and it is common to have pies with it in Greece.

Other than the typical spinach pie that you can find in many places around Greece, spanakorizo is the 2nd most famous spinach related dish.

The following Spinach rice recipe is a typical Greek recipe that my mother and most of the Greek homes I suppose are doing. It’s vegetarian and one that I started appreciating when I got older…as before the only foods that I liked were Meat related… The funny thing is that the recipe is one of the easiest ones that exist. The basic ingredients are dill, spinach and rice…

Last time I cooked it was in a Monday after a long drinking weekend at the Broads in Norfolk UK. I always try to cook something vegetarian after long sessions of drinking in order to convince myself that I am doing a healthy life…:$

Usually I like to add one vegetable cube as it adds a little bit to the flavour but it’s up to you.

What I do like a lot is to add feta cheese.  I have cut a big piece of feta cheese in small cubes and I add it to the pot after I have removed it from the heat, stirring it so the feta cheese goes everywhere.

According to some other recipes you can add tomato juice but I prefer to served it together with tomato and cucumber salad …and some octopus that I brought to UK from my last trip in Greece ! 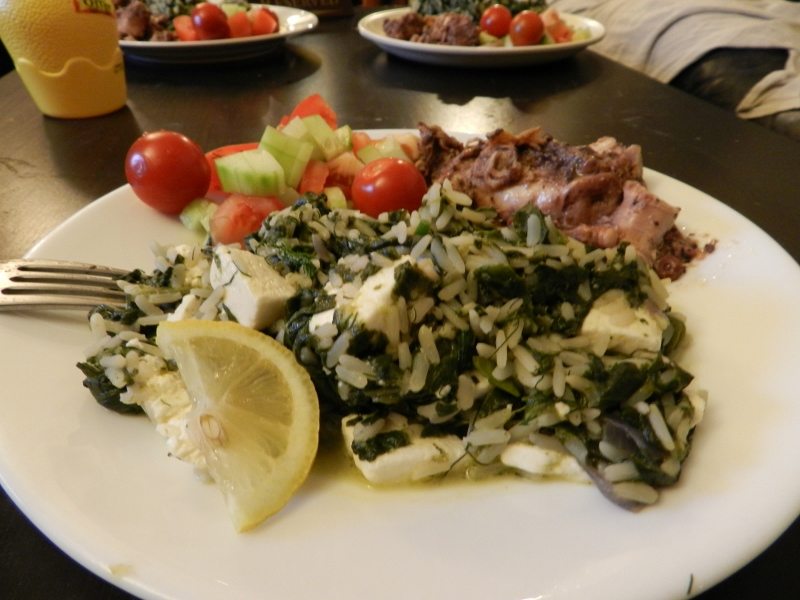