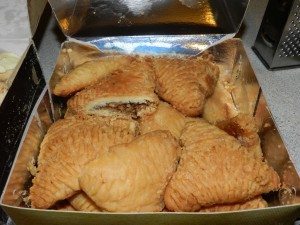 isli sent from my mother…all the way from Greece

To be honest its always difficult to say appropriate words to write for Christmas blogging. Its not my ideal style of article to write but it’s the most appropriate in this kind of time.

This is going to be my 8th Christmas since I moved in to the UK but I won’t be having them in London as a lot of the previous ones. With my brother we will taste some of the local foods in Costa Rica and hopefully we will come back in one piece so I can write you about my stories.

Since I made this blog I had the chance to make some really good recipes that I am proud of and some of them that ….well lets say it more politely…my brother didn’t approved when he was tasting them. 🙂

Its all a learning process I guess and I have been enjoying it until now. To be honest as far food is concerned I never had Christmas really highly as food is concerned. I mean some of them enjoy the turkey and food during New Years Eve but that was never a great tradition in Greece. To be honest  I don’t think cooking a turkey in Christmas eve is a Greek tradition at all.

Personally I remember my mother always cooked something special during new years eve rather than Christmas but generally things you could use for dips. Ok ok…there are some nice Christmas traditional things that Greeks always do.

For example there are those nice sweets which you can see in the picture and called Isli which were sent all the way from Greece and my mother. Yes, she used my cousin that was coming to London…as an excuse to send us more food. Greek Mothers…ussually she sends them by post… (its not a joke 🙂 )

If i was a little bit better as achef…maybe i could try to do them by myself. Well, maybe next year 🙂

I am not a chef, even if I claim to be, but if the foods look tasty to you on the pictures…well there is no reason why you can’t cook them also.

The chef …well kind of a chef..