So before we start with the next recipe we will go with some geography lessons. In general, borek or boureki are small pastries made with phyllo dough or with pastry crust.

A special type of boureki is found in the local cuisine of Crete and especially in the area of Chania. It is a pie filled with sliced zucchini, sliced potatoes, mizithra or feta cheese and spearmint, and may be baked with or without a thick top crust of phyllo. In Venetian Corfu, boureki has also been known under the name of burriche and were filled with meat and leafy greens.

It is not exactly Greek, as the Bulgarians, Armenians  and the Turks have their own types and maybe our eastern neighbors should get the credit for that one but in the end of the day all foods come from some place.

The name is not so important as in the end of the day it is different style of pie. What is important in this case, was the fact that it was my first attempt for making a pie! (or a borek if you prefer)

So after a lot of preparation and persistence I managed to create the following –personal cigar borek.

Sooo..in a big frying pan we put some olive oil and spread it, add the onions and the minced meat.

Add all your seasoning and stir to go everywhere. Pour the glass of the white wine and let it boil until all the liquids evaporate.

We let our filling to cool and in the mean time we prepare the pastry.  Take each the pastry leaves and cut them in three-four sizes vertically. Put some olive oil with a brush, or if you are an amateur like me use your fingers.

As the filling has cool down now, add the trimmed feta cheese and the egg and stir it to go all over the minced meat.

Now open each phylo pastry leave (put 2 if you feel it is better to hold the filling) and we add our minced meat and feta cheese filling.

We roll them up as we would for a cigar. Obviously the size depends on us, I have to admit my was kind of big…

Put them in a big pan that you have covered with butter so they won’t stick and bake them until they become kind of red from the outside.

Obviously the filling was the one that I had at that time available in my place. As I said there are many traditional ways in Greece they do those borek and they differ from place to place.  Either way wherever you go in Greece (or even Turkey, Bulgaria, Armenia or any other eastern country) you will find some style of borek. 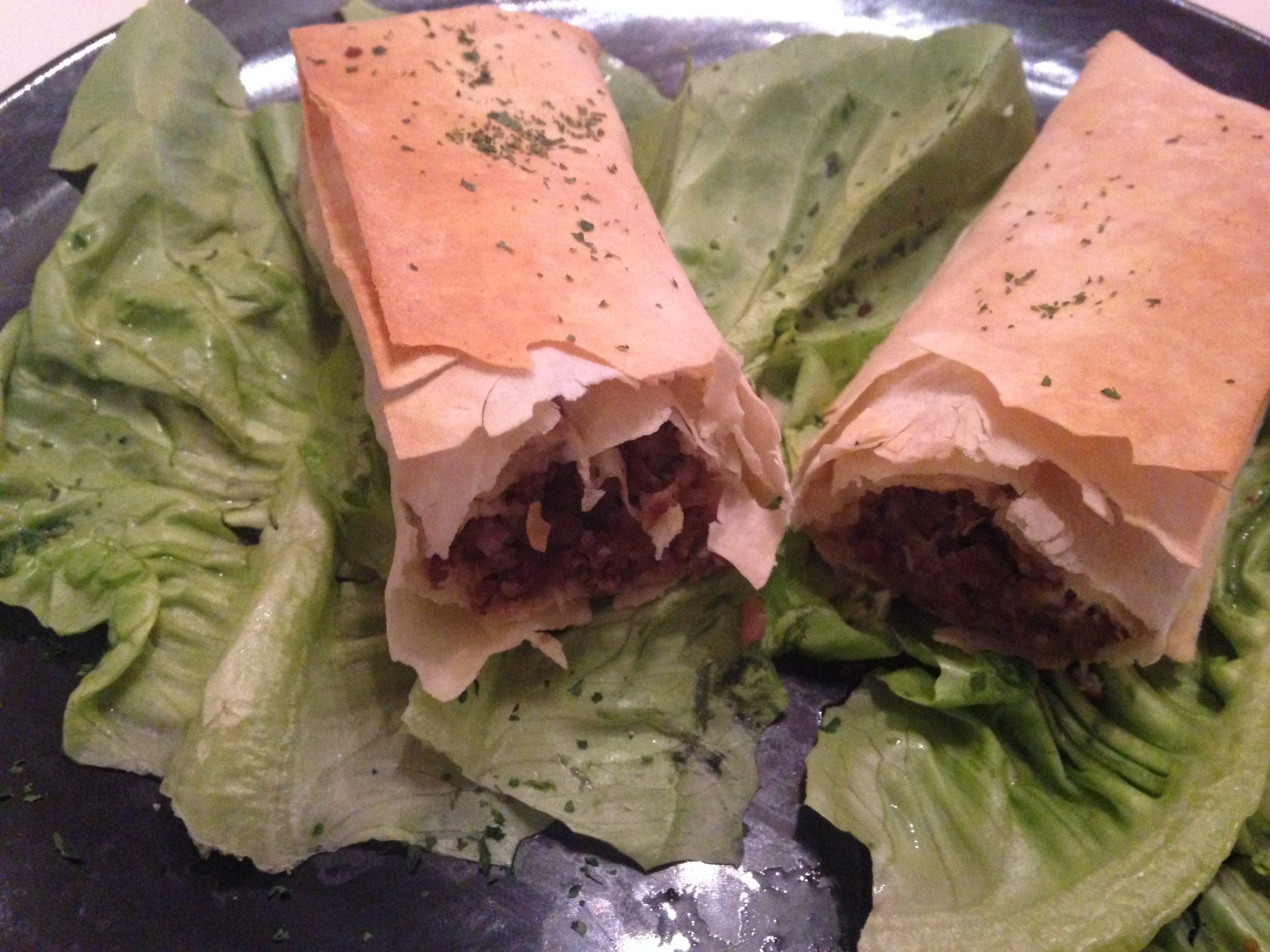