From these primitive broths, came the first soups of humanity, which, with the minimal materials, always managed to eliminate the feeling of hunger while stimulating the organism.

In Greece a place that is moored from everywhere by the sea, the first people who thought to boil their fish were obviously the fishermen themselves, who needed something to eat while they were traveling with their fishing boats.

Somehow, on a small fishermans boat or on one of the many hospitable coasts of the country, the first fishermen’s soup, named “kakavia”  , was born. The name comes from the ancient greek word kakavi, which describes the big pot on which the Greek fishermen were boiling there soup.

The authentic recipe of the soup requires only the materials the fishermen can carry: olive oil and onions..


The fishermen organized and kept for their soup the fish of lower commercial value, which traditionally were the smaller ones. Nevertheless, if you know anything about fishes, you know that the small ones are the tastiest, which essentially means that the smaller the bones are the fish, the more delicious the stubble becomes.

The secret, of course, not to fill the broth or bones with the broth, is to wrap all these fish in a clean cloth, preferably a tulpen, but even in a thin net and tie it. This will allow the fish to boil and melt without infecting the broth with the bones.

The old saying went that the soup was so tasty that the captain of the boat had the broth, leaving the potatoes and the fish to the ratings. 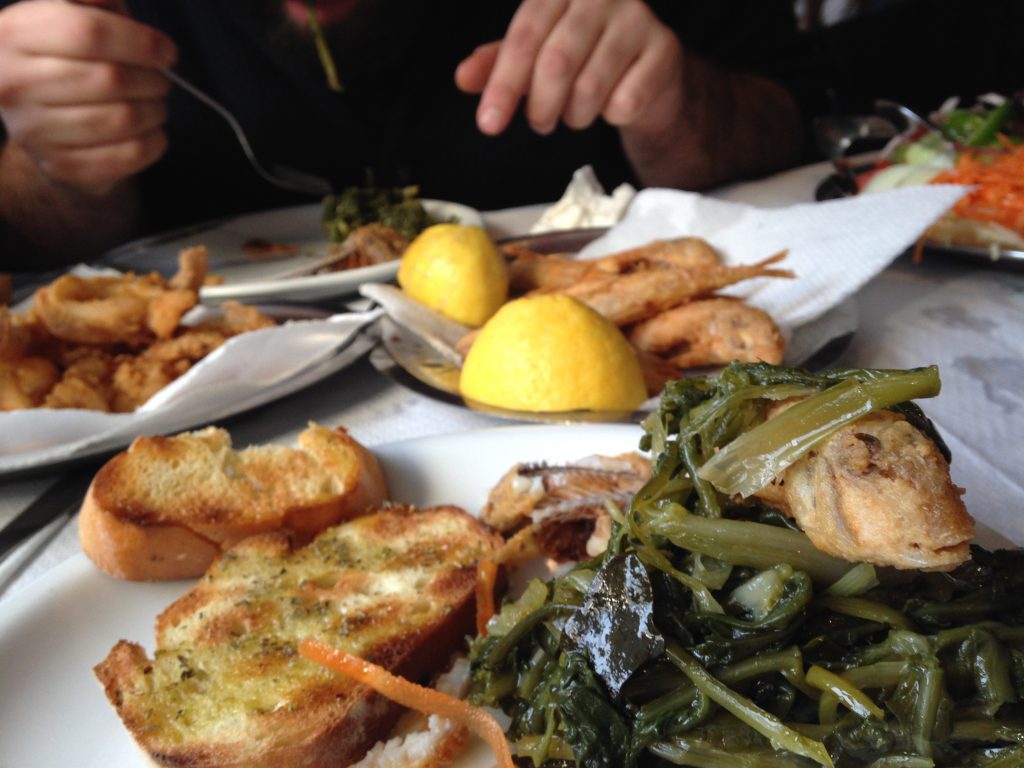 Small fishe’s are the ones that we are looking to add to our soup.

Nowadays, kakavia is transformed into a variant of the common fish soup, as it is often enriched with heads or fish of large fish. For this purpose, the sterils, the hammers, the fodder or the hake are the most suitable.

Take a large saucepan and spread a layer of potatoes at the bottom of it. On top of them a layer of fish and again top potatoes, put the onion on a side. As we said you can have the small fishes of your choice cleaned or in a net so the bones don’t get out on the soup.

Empty the glass with the oil and the lemon and add some water until it covers the ingredients. Make sure you don’t over do it.  Think something between a soup and a stew.

Turn on the fire. On the last layer put a dish so it doesn’t move the ingredients when they boil. Cook on high heat for 30-40 minutes.The lemon with the oil will turn into a wonderful emulsion and the soup will turn white.

*For this case I have added also some carrots and celery as you can see in the pic as…i wasnt on a boat as the local fishermen. Obviously you can remove.